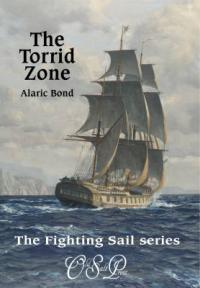 A tired ship with a worn out crew, but HMS Scylla has one more trip to make before her much-postponed re-fit. Bound for St Helena, she is to deliver the island's next governor; a simple enough mission and, as peace looks likely to be declared, no one is expecting difficulties. Except, perhaps, the commander of a powerful French battle squadron, who has other ideas...

With conflict and intrigue at sea and ashore, The Torrid Zone is filled to the gunnels with action, excitement and fascinating historical detail; a truly engaging read.

The Sixth book in the 'Fighting Sail' series

Sailing into 'The Torrid Zone' will be a treat for fans of the Fighting Sail Series, and a real find for those new to the books. V. E. Ulett

The crew of HMS Scylla face not only belligerent French warships but insidious enemies on board their own ship as they sail south to St. Helena. With his knowledge of nautical history, keen eye for detail and an understanding of human nature, Bond is at the top of his game in this new addition to the Fighting Sail Series. Linda Collison, author of the Patricia MacPherson Nautical Adventure Series

Bond vividly captures the life aboard a Royal Navy man-of-war from the lower decks to the captain's cabin in a fascinating tableaux that simply feels right. The Torrid Zone is a bracing visit to an isolated island at an intriguing moment in history. Rick Spilman